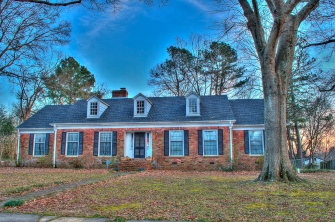 The Mitchell House once stood at the southwest corner of Minor Street and Chulahoma.  It was built in 1854 by E. H. Mitchell, a local merchant who owned a store on the south side of the Holly Springs square.  The Mitchell family lived in the house until 1886, when they sold it to the Mosson family.  The Mossons lived here from 1886 until 1901, when the home was sold to the McClatchys.  After a brief period of ownership by Bessie T. Dean, the home was sold to J. P. Horton, who lived here with his family until 1923.  E. F. Hurdle then lived here from 1923 until 1941, when the house was finally destroyed.

C. E. Nichols and W. J. Edmondson owned the land where the old house once stood for several years, until it was sold to the Holly Springs Baptist Church in 1960, who built their new pastorium, a modern brick building.

The original Mitchell House was a one story frame Greek Revival house, with exterior end chimneys and a pedimented portico supported by round columns.