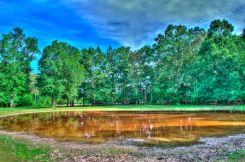 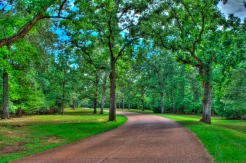 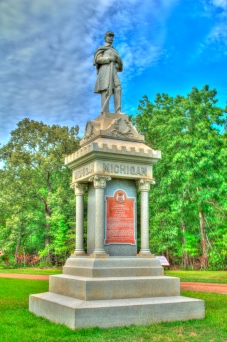 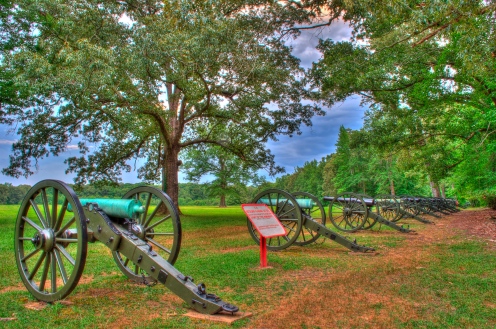 The Battle of Shiloh was fought on April 6th and 7th, 1862, and was the first major battle fought in the Western Theater of the Civil War.  The Mississippi Valley Campaign of the Civil War came to an explosive beginning in February 1862, when Union General Ulysses S. Grant invaded Tennessee and captured Forts Henry and Donelson on the Tennessee River, effectively splitting Tennessee in half.  The Confederate armies, led by General Albert Sidney Johnston, retreated to Corinth, Mississippi, an important railroad hub.  By March 14, General Grant and the Army of the Tennessee had disembarked at Pittsburgh Landing, northeast of Corinth on the Tennessee River.  Grant was ordered to remain at Pittsburgh Landing until receiving further orders.

At dawn on April 6th, General Johnston and his subordinate Generals P.G.T. Beauregard, Sterling Price and Earl Van Dorn, led the 44,000 strong Army of Mississippi against General Grant’s army, surprising them near the Shiloh Methodist Church.  At the time, Grant was stationed north, at Savannah, leaving command of the Army of the Tennessee to his subordinate, General William T. Sherman.  The Confederate early-morning raid surprised the Union soldiers, and heavy fighting took place around the church and surrounding fields.  Though Sherman attempted to rally his troops to the best of his ability, the Union soldiers began to fall back and retreat.

By 9 A.M., General Grant had returned to the battlefield and began issuing commands.  The Army of the Tennessee had retreated back to an entrenched area known as the “Hornet’s Nest”, along the “Sunken Road”.  For seven hours, the Union soldiers held their ground here against numerous Confederate charges and artillery fire from General Ruggles’ battery, before the Hornet’s Nest collapsed, resulting in the death of Union General W.H.L. Wallace and the capture and surrender of General Prentiss and 2,500 surviving Union soldiers.

By the end of April 6th, both armies had suffered demoralizing losses.  The overall Confederate commander, General Albert Sidney Johnston, was shot and killed, becoming the highest ranking officer on either side to loss his life on the battlefield during the entire Civil War.  Grant had suffered enormous casualties, but ended the day in control of Pittsburgh Landing.  Confederate General P.G.T. Beauregard took command of the Army of Mississippi, but controversially decided against leading an evening attack against Grant’s entrenched army.

During the middle of the night on April 7th, General Grant’s Army of the Tennessee was reinforced by General Don Carlos Buell’s 15,000 strong Army of the Ohio.  The Union army now outnumbered the Confederate army by nearly two to one.  At dawn on the 7th, Generals Grant and Buell began a devastating counteroffensive against the Confederates, and slowly pushed the Confederates back.  Further battles raged near the Bell family’s Peach Orchard and the nearby “Bloody Pond”.

By the afternoon of the 7th, General Beauregard realized the day had been lost, and began ordering a general retreat of the Confederates back towards Corinth.  One final battle was fought between the Confederates and Federals at Water Oaks Pond before the battle came to its final conclusion.  There were brief skirmishes between the two armies over the next day, including a quick battle at Fallen Timbers, near the main Shiloh battlefield.  General Grant decided not to immediately counterattack Corinth, much to the dismay of President Lincoln and northern politicians.  Though Grant had won the battle of Shiloh, his reputation suffered greatly in the immediate aftermath.

The Battle of Shiloh was the bloodiest ans costliest battle in American history up to that time.  Total casualties of the battle were 23,746: 1,754 Union soldiers killed, 8,408 wounded and 2,885 captured or missing; 1,728 Confederates killed, 8,012 wounded and 959 captured or missing.  Most of the Union dead were buried in what would become the Shiloh National Cemetery, while the majority of the Confederate dead were buried in several mass gravesites located around the battlefield.  Shiloh remained the bloodiest battle of the war until the end of the year, with the Battle of Stones River.  The Battle of Shiloh remains the 7th bloodiest battle fought in the Civil War, and the 19th bloodiest battle in all of American history.

Shiloh National Military Park was established in 1894 by the United States War Department in order to preserve the Shiloh battlefield.  The park was transferred to the National Park Service in 1933, and was placed on the National Register of Historic Places in 1966.  Numerous regiment and State monuments can be found throughout the battlefield, including monuments erected by the States of Iowa, Illinois, Michigan, Tennessee and Mississippi, the most recent state monument, erected in 2015.