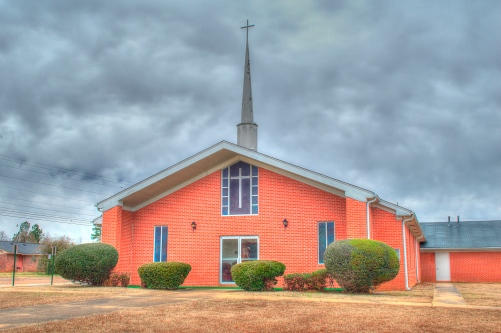 The first version of Anderson Chapel was founded sometime in the 1870s and named Mars Hill Church.  This first church was located at the western edge of Holly Springs, at the intersection of Boundary Street and Park Avenue.  This first church is recorded in a deed dated 1883.  No description of this first church is recorded, and the site of this first church is today an empty field.  This area was known to locals as the “Bone Yard”, due to the discarded animal bones found throughout the area.  In 1889, an elder at Mars Hill, Reverend Isaac Anderson, bought a new plot of land, on College Avenue.  This is the accepted date of the founding of Anderson Chapel.  A new church building was built on College Avenue, and the congregation grew over the next several decades at this location.  Unfortunately, a steep gully formed over the years which threatened this second church.  Anderson Chapel became known locally as Anderson Chapel “Gully” Church.  Though this second church is no longer standing, it was located on or very near the old Henderson Milan home.

In 1920, Anderson Chapel purchased a new lot, closer to the town square, on Memphis Street.  A third church was begun at this spot, with construction finished in 1931.  This beautiful, brick structure had two main doors and one door to the basement, and three large arched windows.  For several decades, the church was also the location for a version of the Marshall County Library, open to African-Americans, who were forbidden from using the segregated main white library (see lower window in the historic picture above).  The seating capacity for this new church was 250, and the church also contained classrooms and a kitchen.  During this time, Anderson Chapel was the “mother church” of the Mississippi Industrial College (1905) located down the street from Anderson Chapel.  Anderson Chapel also played a crucial role during the Civil Rights Movement as a meeting place for NAACP members.  This third church building was located where the building which once housed Annie’s Restaurant is today located.

In 1988, the current church was constructed outside of town.  Though this fourth and current Anderson Chapel building is a modern structure, the members of Anderson Chapel have not forgotten their history.  The original Anderson Chapel cornerstone and two thousand bricks from the third church were incorporated into the current building.  Anderson Chapel remains an important church in the Holly Springs community that is proud of its long and eventful history.