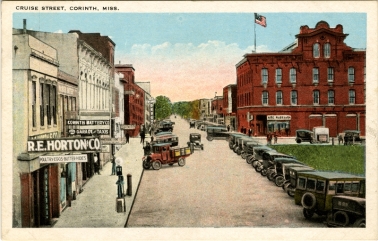 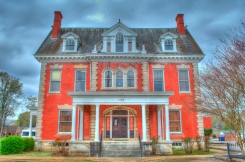 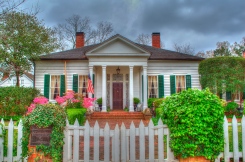 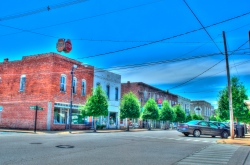 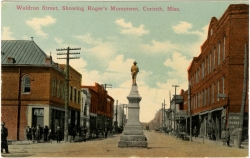 Corinth, Mississippi was founded as Cross City in 1853.  Corinth owes its existence to two important railroad lines: the Memphis and Charleston line and the Mobile and Ohio line.  In 1853 surveyors placed the crossroads of these two rail lines at the spot of the future town.  Even before these rail lines were completed, a new settlement began to form at these crossroads. The town’s first name of “Cross City” was an accurate- if uncreative- description of the new town.  By 1855, the basic street grid and subdivision plan of the town was formed, and an explosive population boom resulted in the formal incorporation of the town in 1856 and its renaming to the more distinguished “Corinth”, after the town in Greece.

The Memphis and Charleston rail line was completed in 1857, and the Mobile and Ohio line was completed in 1861, just prior to the outbreak of the Civil War.  At the beginning of the war, the city contained nearly 3,000 residents.  After the completion of both rail lines, Corinth was likely the second most strategically-important transportation hub in the entire South, after Atlanta.  The United States realized how important Corinth was to the war effort, and made the capture of the town its’ top priority during the War.

In April of 1862, after the devastating Confederate loss at the nearby battle of Shiloh, Confederate General P.G.T. Beauregard retreated to Corinth, followed closely by Union General Henry Halleck.  During the first Battle of Corinth, the Confederates retreated and Corinth fell to the Union army.  In October of 1862 the Confederates, led by General Earl Van Dorn, attempted to retake the town during the 2nd Battle of Corinth, but were unsuccessful.  Corinth remained in Union hands for the rest of the war.

After the Civil War Corinth quickly recovered, due to the strong local agricultural trade base and the resumption of rail travel in 1867.  Corinth entered into a second boom period in the 1870s and 1880s, and the town’s prosperity continued well into the 20th century.  The town was an important source of lumber during the World Wars.  After the Depression of the 1930s, Corinth gained a notorious reputation as the southern hideaway for Chicago, Illinois mobsters.  A local gang called the State Line Mob was eventually formed, and did battle with the legendary Tennessee sheriff Buford Pusser.  Pusser largely cleaned up the area by 1970.

Corinth has a well-preserved town center, with important stores such as Borroums Drug Store, the oldest drug store in Mississippi in continuous use, and Biggers Hardware.  A vintage brick wall advertisement for Sin Alco (an obscure soft drink which is still very popular in Europe) is located downtown as well.  The main residential area of town, just north of the town center, contains many antebellum, Victorian and 20th century homes.  The Corinth Civil War Interpretive Center and the Crossroads Museum are both popular museums.

Today Corinth is a vibrant small town, serving up famous “slug burgers” and preserving its Civil War heritage and vast array of historic houses and museums.