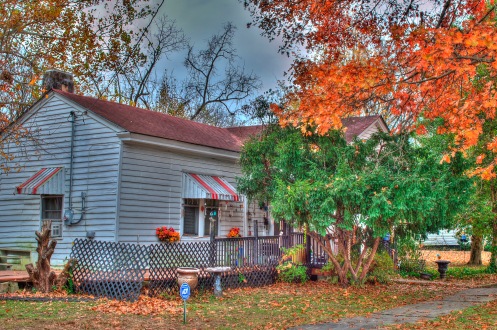 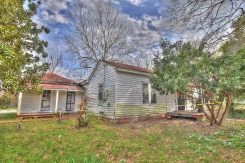 The Lewellen-Brown-White House, also known as “Tarkio”, is an endangered Greek Revival house with surviving slave quarters that is significant both to the local African-American community and African-Americans throughout the country.  The builder of the house, Jesse Lewellen (1800-1864), is a man who frequently appears in the historical records of the earliest decades of Holly Springs and whose legacy is far greater than the brief mentions of his name would suggest.

Jesse Lewellen’s ancestors were from Wales, and the first of the Lewellens settled in North Carolina. Jesse’s father, Reverend Jesse Lewellen Sr. (1775-1830) and his mother Dorcas Sheppard Lewellen (1780-1842) were both born in Anson County, North Carolina, and both the elder Lewellens died there. The Last Will and Testament of Dorcas Sheppard survives to this day. Jesse Sr. and Dorcas had eleven children, but the ones most important to the Lewellen House and Holly Springs were Jesse Lewellen Jr. and his brother, William C. Lewellen (1803-1856).

At some point in the 1820s, a large contingent of the Lewellen clan, including Jesse, William and their oldest brother Isaac Lewellen (1795-1855) moved west from North Carolina and settled in Tennessee.  After the fertile lands of North Mississippi were opened to white settlement with the Treaty of Pontotoc in 1832, the Lewellens made one final journey to the Mississippi Hill Country, where they would all settle permanently.  Isaac and his family would settle in Old Tishomingo County (in the area that would eventually become Lee County), William C. became one of the earliest founders of Ripley, in Tippah County, but Jesse went west, to Marshall County, and the new town that was growing up around the holly trees and flowing springs.

In 1840, Jesse Lewellen was a prominent backer of the Presidential campaign of Whig candidate William Henry Harrison.  Harrison would go on to be elected as the 9th President of the United States, though he would tragically die in office 31 days after his inauguration.  By the early 1840s, Jesse Lewellen seemed to have left the world of politics and began practicing law full time.  Though he is often described as a “probate clerk”, Jesse was in fact a Judge of the Probate Court, serving as such from at least 1843, when he presided over a land sale.  Jesse continued to practice law, but in 1849 he was elected as Marshall County Surveyor.  Jesse practiced law and was a prominent figure in local politics until his death in 1864.  The exact location of Jesse Lewellen’s grave has never been determined, though it is likely to have been Hill Crest Cemetery in Holly Springs.

In 1854, Jesse Lewellen built this house, on Randolph Street in Holly Springs, next door to Sutherland (1839).  Jesse purchased the house from Charlotte G. Richards for $800 ($23,000 in 2019 dollars) and proceeded to construct his home.  The house itself is a fairly typical one-story frame Greek Revival house.  Behind the house was built slave quarters which housed the Lewellen enslaved.  At some point, between the construction of the house in 1854 and Jesse Lewellen’s death in 1864, Jesse likely had a “relationship” with one of his enslaved workers, named Sylvia. Like most slaver/enslaved encounters during this time, this relationship was almost certainly non-consensual.  Because of the similarities between the Lewellen DNA, it is also possible that one of Jesse’s brothers (William or Isaac) could have been the progenitor of this line. The result of this illicit encounter would be the creation of a long line of African-American Lewellens.  While the legitimate “white” Lewellen line died out long ago, the African-American line prospered and spread throughout the United States.  All of these African-American Lewellens originated from the small slave quarters that still stand behind the main home.  After Emancipation, many of the former enslaved Lewellens continued to reside in Marshall County, though their descendants spread throughout the country, even as far as California.

In 2019, the Lewellen-Brown-White House suffered a devastating fire that gutted the interior of the house, making the home temporarily unlivable.  The slave quarters behind the house remain undamaged.  Remarkably, descendants of the enslaved Lewellens have banded together to attempt to save this antebellum structure and its slave quarters.  The survival of the house and the slave quarters is important both to historians and descendants of a remarkable citizen from the earliest days of Holly Springs.

The Lewellen-Brown-White House is a one-story flanking gable frame Greek Revival house with a pedimented portico supported by square pillars and a front entrance with transom and sidelight windows.

Thank you to the following individuals who provided valuable help, advice and data for this blog post- Beverley Lewellen Bevel ( an African-American historian and descendant of Jesse Lewellen); Rhonda Roederer (another historian and Lewellen descendant) and Morrie McCulloch (Holly Springs resident who provided valuable transcription services).  Beverley Lewellen Bevel and Rhonda Roederer were particularly helpful in providing the crucial connections between Jesse Lewellen and the rest of the North Mississippi Lewellen families.