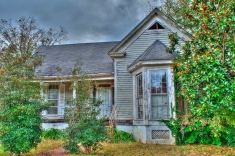 The Gray-Lucas House was built in the Italianate style, though much of the original Italianate decoration has been lost over the years.  It is a single-story flanking-gable frame house, with a gable-front ell with bay window.  There is a three-bay porch supported by square posts, and the entrance is framed by sidelights and a transom.

The Gray-Lucas House was listed on our 2016 list of the Top Ten Most Endangered Historic Properties in Holly Springs.  The home has been empty for many years, and shows signs of extreme neglect, including busted windows, holes in the roof and front gable and damaged siding.  Without some needed structural and exterior attention, this home will likely be condemned within the next 3 to 5 years.

UPDATE (March 2018):  Our estimate of 3 to 5 years was sadly inaccurate.  In 2018, after a contentious vote of the Historic Preservation Commission, the Gray-Lucas House was authorized for demolition.  The house was demolished in the middle of March 2018, destroying yet another piece of Holly Springs’ architectural fabric.