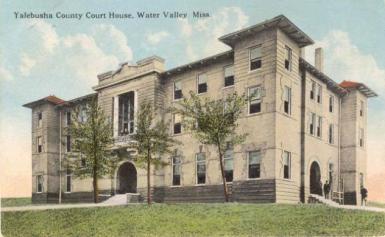 in 1912, a fire destroyed much of the Courthouse.  The tower and upper portions of the Courthouse were completely destroyed, but the bottom floors were salvaged.  In 1913 the Courthouse was extensively restored by architect P. J. Krouse.  A third story was added to the Courthouse, topped by a heavy cornice line with a frieze below.  Above the main entrance was added a large window with Tuscan columns behind a balcony.

The Courthouse was made a Mississippi Landmark in 1984.